The power of photographic memory

This artistic process that will last more than fifteen years until his death.  He had no choice to avoid putting his death on the scene, the last episode of this masterful process of creation.

To portray an aristocratic society to which he does not belong wholly but which he can approach and co-operate on a daily basis with such a clear vision of his morals and beliefs is pure pleasure for a reader in search of adventures and stories to be imagined frozen by a camera.

Without the persevering determination of Marcel Proust to create a masterful literary work, to built this work as an exceptional artistic creation, reading In Search of Lost Time would be an unbearable novel to read for a neophyte photographer in literature and would have no Influence on our vision to see the world by narrative composed of a simple accumulation of photographic memories that would not suffice to keep his reader in suspense.

In the same time photographer will place his tripod, his lenses with different opening, angle, speed and paper, to revel the final result of his process confirming his role of photographer of informing, representing, and surprising.

Marcel Proust, used maybe a photographic memory filed in mind he could pick up as a reminder, as records during his writing process. The revelation of the involuntary memory

The book written by Jean -François Chevrier ” Proust et la photographie ” proposes an analogy between the involuntary memory that would be at the origin of the vocation of Marcel Proust for the writing of The Search for lost time and the unconscious mechanisms at work in photography.

Here are some extracts from the book of Monsieur Jean-François Chevrier:

It is the gradual discovery of the powers of photography as a work of memory.

Watching, recording, writing, reproducing, imitating, revealing, imagining are for me the seven keys to the photographic imagination.

For the needs of the book, of a circular construction, Proust frequently reverses the terms, anticipates.
His narrative assumes from the beginning the possession of the final truth.

A collection of memories, like an album of photographs, can’t make a novel.

In order to construct the Research, it was necessary to establish a firmer point of support: the revelation of the involuntary memory. As early as 1909, Proust had shut himself up in his work, in the almost empty architecture of his novel, which he would never cease to fill until his death.

I see in this company a model for photographers, because perfectly romantic.

But I must observe that the practice of photography today demands from the photographer a singular awareness of his ends and his means.

It has always seemed very significant to me that the last fragment of Jean Santeuil, which prefigures the famous episode of the Research or where by a characteristic effect of the involuntary memory, the hearing of a sonata de Vinteuil re-emerges in the spirit of Swann the distant period of his first relations with Odette de Crécy, that this last fragment ends with this sentence:

“And the photograph of all this had taken its place in the archives of his memory, archives so vast that, for the most part, he would never look at them, unless by chance they were reopened, as had been this The pianist’s hangover that night. ”

“The photograph of all this” is the complete recording of the past in memory, restored by chance, when one might think it lost.

As for the formula “the archives of memory,” Proust owes it to Baudelaire.

Proust brings an additional element of analysis by introducing the temporal or event dimension. The apparatus is no longer a reproduction tool but a recording tool. 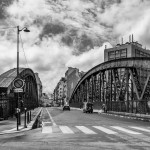 Monuments under construction in Paris